Historian of visuality, memory, and race in Iran 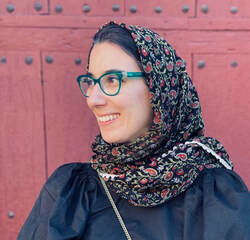 Beeta Baghoolizadeh (PhD, History, University of Pennsylvania) is a historian, writer, and artist. Currently, she is an Associate Research Scholar at Princeton University's Sharmin and Bijan Mossavar-Rahmani Center for Iran and Persian Gulf Studies.
​
Her first book, The Color Black: Enslavement and Erasure in Iran (forthcoming with Duke University Press), examines race and racialization through the lens of the last decades of legal slavery and the aftermath of abolition in Iran. Although enslavement was only formally abolished in Iran in 1929, Iranians popularly deny any history of slavery, while still hanging onto racist anti-Black vestiges in their every day culture. Her work explores this cognitive dissonance through narratives of memory and erasure. Through a close examination of photography, archives, architecture, paintings, theater, written documents, and more, The Color Black not only argues that Iranians had a dynamic understanding of race and racialization during the 19th and 20th centuries, but also explains why the erasures surrounding these issues remain so pervasive. Her second book, tentatively titled, The Blurring of Myth, Modernity, and Memory, examines how social and cultural shifts often attributed to “modernity” in Iran can be directly traced to the abolition of slavery.

​Beeta’s art, “Diaspora Letters,” examines the boring and the mundane in everyday Iran and is represented by Twelve Gates Arts. She is the director of the Ajam Digital Archive, and serves as the Resident Historian for the Collective for Black Iranians.

Beeta’s work has been profiled in mainstream media including CNN, BBC Persian, The Independent, Al Jazeera English, Huck, and other platforms. Prior to joining Princeton, Beeta was an Assistant Professor of History and Critical Black Studies at Bucknell University. She has also been a Research Fellow at the Bard Graduate Center, and a Regional Faculty Fellow at the University of Pennsylvania’s Wolf Humanities Center.